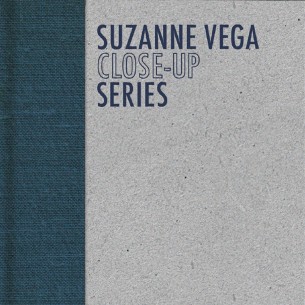 Between the winter of 2010 and the fall of 2012 Suzanne Vega released the first four volumes of a series she named Close-Up. In August of 2014 the four albums, along with a 5th disk of bonus material and a DVD of interviews and songs performed at New York’s City Winery in July of 2013, were packaged together in a hardcover package of 65 songs along with over 60 pages of photos and notes.

On level one could view the recordings as a pragmatic project to capture through her own company, Amanuensis, a good number of songs from her extensive back catalogue originally recorded for A&M. The enterprise had several benefits: ownership of the masters, a tangible product to sell at shows, and a way to bridge the time between Beauty & Crime (her 2007 recording for Blue Note) and a next full album of new material (Tales From The Realm of The Queen of Pentacles in 2014)

But on another level this set of recordings – best appreciated, in my opinion, in the satisfyingly tactile box set rather than immaterial digital download – is a revealing re-imagining of Suzanne’s music. Perhaps the most important aspect of the set is the nature and quality of the recording and mix by Joe Blaney. There is a clarity, immediacy, and texture in these recordings, especially in the capture of the vocals and acoustic guitar that recalls the small-combo jazz recordings of the 1950s and 1960s.

In particular, songs drawn from her first two albums for A&M, Suzanne Vega and Solitude Standing – such as “Cracking,” “Small Blue Thing,” “Some Journey,” Ironbound/Fancy Poultry,” and “Undertow” — are now heard without the sonic “varnish” of the original recordings. It is true that her first recordings hold a powerful nostalgia for fans and they are largely devoid of the production and instrumentation that make many 1980s albums embarrassing – the sound equivalent of big hair. But even more so, in Close-Up, the spare, stark poetry of these songs is now matched by an equally clear and simple instrumentation, production and sound mix.

Some fans may occasionally regard Vega’s songs as inviolable monuments but the Close-Up recordings have, in many ways, unshackled some of her most iconic songs and provided an experience much closer to that with which Vega now delivers these songs on stage: her improved vocals (fuller) and simplicity of instrumentation (often just bassist Michael Visceglia or guitarist Gerry Leonard).

Using the 5 disks of the Close-Up box set (or the 4 original issues plus separate bonus disk) one can assemble a playlist of the 10 songs that comprise the original running order on Suzanne Vega. The sound and performance of the new versions are extraordinary; they distill the music to its essence: the texture of Suzanne’s voice and its idiosyncratic intonation (surely one of the distinctive voices in music); her approach to playing the acoustic guitar (at times a hypnotic, almost Bach-like cycle); the architectural structure of the lyrics.

In the entire set only one song, in my opinion, seems to lose something in translation: Nine Objects of Desire’s “Headshots.” The 1996 version featured a thumping bass line and a sparse snare drum; it was perhaps the most interesting song on that album. On Close-Up the arrangement is similar to the earlier version but the drum is absent and the bass line muted. Given how finicky fans are about artists messing around with their memories, one near-miss on 5 CDs is not a bad hit rate.

Some other highlights: “Anniversary,” which gracefully combines Suzanne’s guitar line with cello; “50-50 Chance,” which retains the hypnotic Philip Glass arrangement but puts an even darker, mournful tone on this version than 1990’s days of open Hand (which featured a more nervous, jittery, feverish string performance); “Daddy Is White,” a song that combines humor and menace, a “Walk on the Wild Side” riff, and a wonderfully truculent delivery by Vega; “Bound” a song whose lyric and disarmingly vulnerable and sparse vocal makes for a powerful but uneasy listening experience (it is Suzanne Vega’s most overtly emotional performance yet) as it lifts the screen of cool inscrutability and observational distance that she so often maintains in her music.

As with her other productions, Vega has ensured the Close-Up Series album’s printed material has a clean and elegant design – the materials, type face, color schemes and photographs. These days, with high-quality music streaming services and digital downloads, one might wonder the point of CDs.

But it is precisely the look and feel of the set that embodies an important aspect of Vega’s music. In song after song objects personify emotions and states of being, they “come alive;” they tell the story of how Suzanne has related to the world — a “wooden horse,” a poster in “Headshots,” and a “small blue thing.” In this regard Close-Up serves as a wonderful survey and talisman of her art.