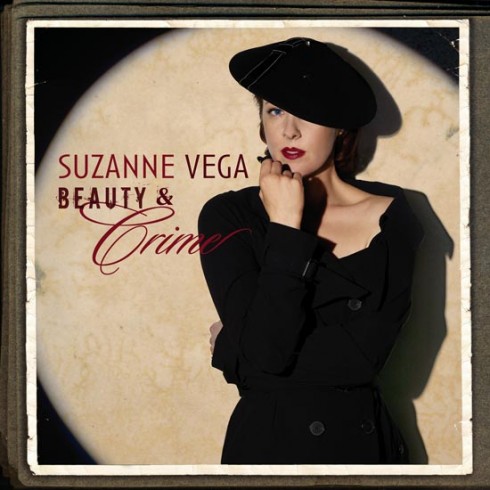 Beauty and Crime was released in the summer of 2007. Produced and engineered by Jimmy Hogarth, this album, along with the recent Tales From the Realm of the Queen of Pentacles (February 2014) set a new standard in songwriting, instrumentation, arrangement, and performance. It is an album that, in some ways, comes across as a debut by a new artist, as though she had shed her musical skin. The core of the music is still the Suzanne Vega that wrote “Cracking,” but it has morphed into something richer and more emotionally expressive and melodic.

Although previous albums also featured songs with strong melodies and catchy instrumentation and arrangement — “Book of Dreams” on days of Open Hand, “In Liverpool” on 99.9F, “Caramel” on Nine Objects of Desire or “(I’ll Never Be) Your Maggie May” on Songs in Red and Gray, for example — the music on Beauty and Crime as a whole is a quantum level higher. Musically and thematically the album is a kind of sequel to “Luka” in as much as that song featured a disarmingly catchy melody married to a lyric that, upon close examination, is disturbing and full of melancholy and memory. So too Beauty and Crime is full of difficult memories and feelings made accessible (and listenable) by their presentation within musical lines that Paul McCartney would envy.

“Ludlow Street” has a beautiful and gentle musical phrase in which we remember the dead (her brother, Tim); “New York is a Woman” is at once a harmless remembrance of some guy’s first trip to New York but also a stark reminder of 9/11 with the line “look down and see her ruined places/smoke and ash still rising to the sky” and the phrase “you were dazzled by her beauty and her crime,” that both reflects the crime found in any large city and its points of urban beauty (Central Park, for example) but also the beautiful, clear, deep blue sky of that September morning in 2001, the crime committed, and the horrifying columns of ash.

The long shadow of  9/11 is also present in “Angel’s Doorway,” another song that combines a catchy melody with the memories and ghosts of something of which we do not speak (“he can’t show/what she doesn’t want to know/those thing’s he’s seen”) much as the boy in “Luka” says “Just don’t ask me what it was.” Similarly, “Anniversary” — perhaps the most moving song Vega has yet created — combines a lovely and flowing melody and soulful backing vocals, with an emotionally clear-eyed chronicle of the comings and goings of people as they go about 9/11 remembrance services:

Elsewhere we are treated to examples of phrases and music that stick stubbornly in one’s head: “she’s a pornographer’s dream” (“Pornographer’s Dream”); “angel comes home/his clothes in a cloud/of the dust and the dirt and destruction” (Angel’s Doorway”); “we will make a braid of gold/for you to keep when you are old” (“As You Are Now”); “this was a youth mall of america/on this street/all of us hanging here/like underaged cops on a beat” from the wonderful “Zephyr & I.”

The twin songs “Unbound” and “Bound” continue the marriage of difficult feelings and memories with music that not only engages us but makes us want to listen again and again to the songs despite the messages they convey:

Both songs, particularly “Bound,” make for uneasy listening. Like the album as a whole, they combine disturbing imagery (“crime”) with melody (“beauty”) to draw us in.

Beauty and Crime, whether on CD or on vinyl, sounds wonderful and was recognized as such when it received the 2008 Grammy Award for Best Engineered Album, Non-Classical: Tchad Blake, Cameron Craig, Emery Dobyns & Jimmy Hogarth (engineers) Beauty & Crime performed by Suzanne Vega. The sound quality of this album deserves a decent digital source (such as a CD or FLAC recording) or, if you have a reasonably good set-up, a listening of the vinyl versions (the 4 LP, 45 RPM Classic Records pressing is outstanding).