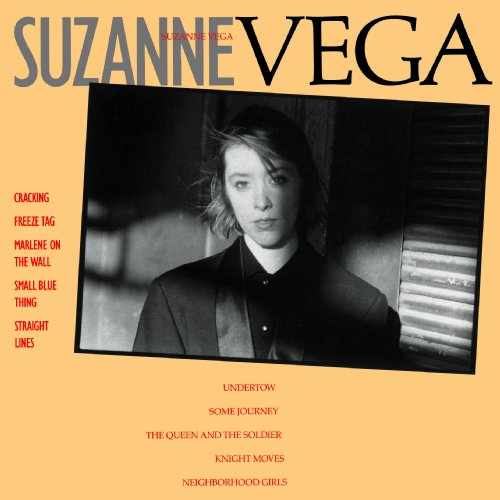 30 years ago this April an album appeared in record shops. It didn’t look like other albums of the time; its plain tan cover and black and white photo did, however, bear a faint resemblance to “Leonard Cohen’s Greatest Hits” (which was a highly positive omen). When I saw the album it was displayed on an end rack (rather than in a bin) near the front of “Record World” (a long-defunct store). I was aware of the name Suzanne Vega; I’m still not entirely certain how I had heard of her and her music. My theory is that I had seen her one or two summers previously at a Toronto folk festival but despite searching for evidence that Suzanne appeared in such a festival in that area around that time, there is no document that resolves this trivial mystery. In any case, I do remember a sense of great surprise in seeing the record and that it was immediately purchased.

There are not many moments in one’s life that are remembered with such high fidelity. That it involves a vinyl disc is somewhat telling as to the kind of things that animate your correspondent’s imagination. The other vivid memory is that of listening to the album for the first time. There are many positive and useful aspects of today’s internet-enabled database-in-the-ether, but one unfortunate consequence is that I don’t think the sense of personal discovery is quite as pronounced as in those days.

Now a-days we can immediately share a link to an obscure artist’s song in an instant; this first encounter with “Suzanne Vega” was one experienced in complete solitude and splendid isolation. Unlike today when everyone knows everything all the time (or at least, that is the conceit) this discovery was harder to share but also more valuable. Other than inviting a trusted fellow music-lover over to your house to listen to the record, there was no easy way to either share this revelation nor any way to even know who else might think this recording was amazing. Yet this also had the effect of creating a kind of personal culture, not a mass one, and it also made meeting fellow aficionados of Suzanne Vega special (something that is true to this day).

The first lines of the album come from the opening song, “Cracking:”

Whether by design or by fortunate chance, that these are the first lines of her first album is highly providential, for they set-up a 30 years-plus journey through the memoryscape of Suzanne Vega, an alternate reality so compelling that it continues to transfix listeners today both when these first songs are played and when the newest songs are performed, songs such as “Portrait of the Knight of Wands” or “Crack in the Wall” from Tales From the Realm of the Queen of Pentacles.

For this reason, and others, this listener considers “Cracking” Vega’s most important song; not necessarily the best (although it is one of the best) nor everyone’s top pick (many listeners might select songs like “Gypsy” or “The Queen and the Soldier” or several others ahead of this one), but it is the most important because, to this day, it is such an arresting and peerless recording. The vocal — rap, Lou Reed — the instrumentation — sharp, stark — and most of all the images: of the solitude of our walk; of the heart broken, worn out at the knees; of the sounds of footsteps, of brittle branches; of the bracing cold; and of the sky, the sun, blinding dizzy golden, dancing green.

We enter the song and journey with Suzanne through her imagination and wonder “where the hell I have been;” through the rest of this first album — through Freeze Tag, Straight Lines, Undertow, Some Journey, all classics — and through most every song she has written since — Wooden Horse, Calypso, Ironbound/Fancy Poultry, Tired of Sleeping, In Liverpool, Rosemary, Headshots, Ludlow Street, Crack In The Wall — we realize that we have never left her dream-world.

We all dream, but unequally. Those artists who dream during the day with their eyes wide open are dangerous; they make their dreams ours.